The Inside Scoop: It's Halloween, so you know I've got to write a Halloween story. This one fell in my lap - I live three blocks from the store - though I wouldn't have known about it if not for Simon Ritt of Disc Diggers. Shout out to you, Simon. Was bummed I couldn't sneak in more details about how Bear paints. He actually does it backwards, painting the top layer on the window first and the background stuff afterwards. I also wish I could have included his description of his work: "A big ass window of monsters." I used the word mural, which technically isn't right because a mural is a wall painting and he painted his creatures on glass. But I think it applies still. I think. 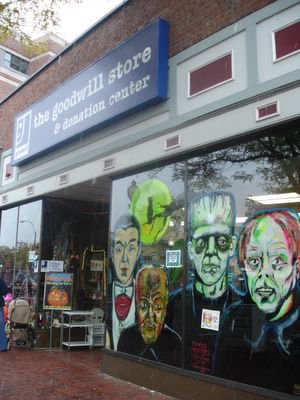 A store whose windows, not prices, are most frightening
By Peter DeMarco
Globe Correspondent

There, in the dark light of Wayne Viens's (cq) storefront, My Size Barbies have been become mummies. Cute baby doll heads are severed and stacked atop each other in macabre totem poles. Surrounding them are creepy mannequin arms, fiendish-looking toy animals, and, dangling on a string with a foot protruding from its neck, the mutated toy known as "Kicked to the Curb."

"I mean, I was not in a good place when I did that," says Viens, smiling sheepishly while describing his creation. "I've had people say to me, 'Oh, you should get some help.' But I feel lucky I have an outlet."

You won't find Boston's oddest Halloween display at an art gallery, a fancy Newbury Street store or even a costume shop. It's at, of all places, Goodwill Industries (cq) in Davis Square, where Viens, the store's manager, plays Dr. Frankenstein (cq) with toy dolls and Cambridge painter Boby Bear (cq) has re-created Hollywood horror movie mainstays in a frightfully alluring storefront glass mural..

The giant monster montage, with Dracula, The Werewolf, The Mummy, The Phantom of the Opera and Frankenstein's monster staring onto Elm Street, immediately jumps out.

"That vampire painting here -- that looks like him. Bela Lugosi," (cq) said Albert Donati, (cq) 76, of Somerville, standing on the sidewalk about eye-level to Dracula's fangs. "He's quite an artist."

But Viens's half of the storefront, with its disfigured dolls and eclectic collection of funereal artifacts, from a black raven to an Elvis sun god to a copy of "Funeral Customs All over the World", is far more bizarre.

"Some of it's kind of dark, but I like to think it's dark and humorous," says Viens, who has transformed his storefront into a strange art gallery the past five Halloweens. "This year I softened it up a bit. I put more cute stuff in there. Last year, I think I went a little too dark. I had this tribute to Salvador Dali (cq) -- it was this crazy dog. He was just a little too scary."

The Somerville Arts Council's long-running Windows Art Project, (cq) in which businesses provide show space for artisans, inspired Viens to assemble his first display. The idea for a macabre shrine, as Viens calls it, emerged from both a love for horror movies ("Evil Dead 2 is one of my favorites") and a trip he and his wife, Linda, (cq) once took to Mexico during that country's traditional Day of the Dead celebration.

A lifelong artist and photographer who once lived in Fort Point, Viens, now of Somerville, began looking around his store for materials to create his display. The discarded dolls and stuffed animals, albeit different, seemed ideal, he said.

"Part of this is to inspire other people. I'm subtly trying to send a message about Goodwill -- you can find something creative here," Viens said. "Halloween is our busiest time. This is our Christmas at Goodwill, and as a manager I've got to hit my (sales quotas). Saturday I'm having a brass band in here."

A veteran of several Cambridge storefront windows -- his hand-brushed hamburgers and Coca-Cola bottles can be seen at Mr. Bartley's Burger Cottage (cq) and Leo's Place (cq) in Harvard Square -- Bear had never done a Halloween display. Still, he felt right at home with the subject matter. 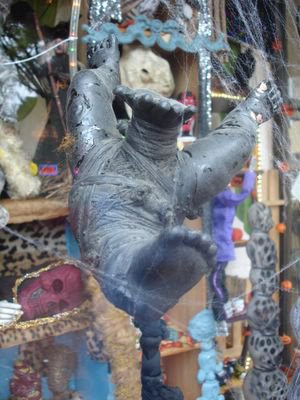 Kicked to the Curb!

"Wayne and I, being the age we are, we grew up when monsters were king," said Bear, 50, who painted his second Goodwill Halloween mural this fall. "Whether it was Aurora monster model kits (cq) of Dracula or Frankenstein or the "Famous Monsters of Filmland" (cq) magazine ... it was a whole monster age for guys who grew up in the 60s. There's a real comfort zone there for me."

Reactions to Goodwill's storefront have, for the most part, been exactly what Viens was hoping for.

"I was looking for a Halloween costume, and I saw the window and I literally thought, 'I should shop here for it,'" said Cindy Liebman, (cq) 27, a Somerville lawyer, emerging from the store with her purchase in hand. "I'm going to be Snow White, and I needed the yellow skirt. I couldn't find it anywhere else."

"In the Cambridge-Davis Square area, you do find creative people,” she added. “I'm glad they want to share."

Stephen Mackey, (cq) president of the Somerville Chamber of Commerce, said as creative as the city’s residents are, nothing quite measures up to Goodwill's spooky storefront this Halloween.

"But the totem poles -- " he said, hesitating. "Maybe we should have a sign that says they might be too much for anyone under 8." 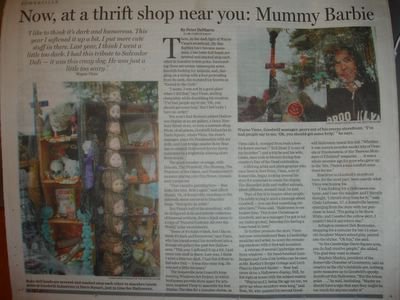 Actual spread in the paper. But no photo of the mural. Boo!